Driving Amada punch with features such as tool teach and remnant management.

HC Coils Limited, based in Gosport, UK, manufacture heat exchange products. The company previously relied on a simple CAM system purchased alongside their Nisshinbo HIQ1250 and HIQ1250HS punch presses, but experienced a number of issues.

John Yeomanson, Drawing Office Manager, said; “The interface to the old system was very poor and still appeared to be DOS-based, even in 2010. There was no automatic nesting, meaning that I had to employ someone all day literally to play ‘Tetris’ to lay up nests, which is a mundane and boring job for a relatively highly paid member of staff. Support was very poor, with questions often going unanswered. I recall that we paid quite a lot for maintenance but never seemed to get any updates.” 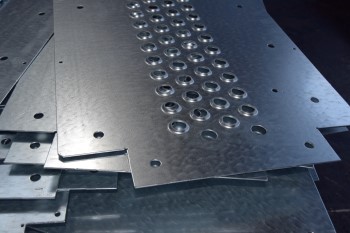 The company looked into purchasing a new punching machine and saw a demo of nesting software provided by the machine vendor. Jon was initially impressed with the software, but as they ultimately decided to delay the machine purchase he could not buy the software as it only drove that machine.

After seeing the possibilities they decided to research the market for alternative nesting systems, selecting JETCAM alongside two others. John found that JETCAM was by far the easier of the three to use; “One of the systems was discounted pretty quickly. The other didn’t seem to have all of the features that we wanted and I got the impression that we’d have to redraw too many parts. JETCAM had all of the functionality that we needed and it was also relatively inexpensive.”

HC Coils purchased JETCAM Expert Premium with free-form nesting, along with JETCAM Orders Controller (JOC) to allow for easy and remote ordering of parts. Installation and training were arranged shortly afterwards, taking just two days for both machines. Jon felt that the system’s interface allowed for staff to learn it quickly; “I thought the training was good, and it was very easy to pick up how to use the system. ”

HC Coils had several thousand components that needed to be imported into JETCAM, but this presented little problem using Single Component Automatic Processing (SCAP). All of the original DXF files were placed into a folder, which SCAP could then automatically process, creating component files and placing tooling automatically, so that all of the parts were ready for nesting on either machine. Jon explained; “SCAP is generally better at tooling parts than an operator might be. We even accidentally discovered a better way of punching our fan plates.”

JETCAM’s Tool Teach mode also delivered benefits, by allowing JETCAM to ‘learn’ complex tool placements. Noted Jon; “We use it on form tools, and many of our parts would be much more difficult to make without it. Every job has at least two of the form tool plates, which are automatically tooled with Tool Teach.”

Once parts had been created JOC Lite was used to structure assemblies and create order lists. Complex assembly structures can be created by dragging and dropping components and specifying their quantity and, where relevant, revision number. Then, worksheets can be created in the orders screen and either components or complete assemblies can be dragged onto the worksheet and sent to JETCAM for automatic nesting. CSV files of components can also be imported in to quickly populate the orders lists.

After going live the role of programming dramatically changed. Previously, programming was a full-time, manual and labourious job. With the combination of automatic tooling and nesting in JETCAM Expert and the ability to quickly order components programming reduced by around 85%. Said Jon; “We can now get a full day of production programmed in under an hour. With JOC any of our staff with 20 minutes of training can produce a nest file.”

Other features such as remnant sheet management and common punching added further benefit. Remnants could be easily created during nesting and then re-selected for orders, reducing material wastage. Common punching decreased waste material further by using a single cut to separate parts rather than leaving a skeleton between them. Nests also take less time to run.

In 2012, two years after implementing JETCAM, the company decided to replace both Nisshinbo punch presses with an Amada EM 2510 with sheet loader. They simply purchased a replacement postprocessor, which was installed in one day, and were up and running. SCAP could again be used to re-tool all components, minimising any down-time during the transition.

HC Coils have subscribed to an annual maintenance contract. In addition to technical support they have also benefited from new features in recent releases, especially in relation to the new user interface. Jon noted; “The new search facility saved a fantastic amount of time for repeat orders.”

Support for any system that a company is reliant upon is important, but HC Coils have had no issues with JETCAM’s UK distributor. Commented Jon; “It’s reassuring to know that if I need help I can phone support and generally get an answer there and then. They either log in and show me how to do whatever it is I’m trying to do or tell me over the phone.” JETCAM also provides an online ‘University’ of video tutorials, available free to all customers covering all core products.

Although the company’s turnover and output has continued to rise Jon notes that the combination of JETCAM and JOC still allows for extra capacity. He finalised; “With the savings in programming time alone the system paid for itself easily, with an ROI within a couple of months. We simply would not be able to manufacture the amount of products we’re making now with the previous system.”