Ribo sees ROI in under 5 months after update

Driving Trumpf punches and lasers with JETCAM up to 70% faster

Ribo Blechbearbeitung GmbH, based in Teistungen, Germany manufacture bespoke retail outfitting products such as food carts and display systems. Since 1991 the company has had a variety of Trumpf CNC punch and laser machines. Initially the software was driven by an ageing DOS-based CAM system which was basic and inefficient. Raik Klingebiel, CNC Programmer, said; ”It could only nest similar components, and tooling was complicated. Essentially almost every sheet generated a remnant and we constantly had to stop the machine to change tools. Initially we decided it was cheaper to continue using it rather than replace it but over time it became clear that we could make further savings and see greater throughput.”

The company considered software offered by the machine vendor, but quickly discounted it due to cost and feedback from other users. They did initially purchase a low-cost system but dropped it after failing to successfully implement it 1 1/2 years later because of its complexity and lack of flexibility. Although initially cautious of replacing their basic but stable system they looked at JETCAM, also benchmarking it against another system, which Klingebiel noted was significantly slower; “In our tests JETCAM outperformed the other system by up to 70% and just seemed much easier to use. During the demo the other system’s programmer was typing so fast but couldn’t keep up with the programming load. A key difference for us was that at the time we were cutting large sheets but had mid-size machines and needed the ability to flip the sheet - JETCAM could do this but the other system couldn’t.”

The decision was made to select JETCAM in 2001. At the time the majority of Ribo’s business was large volumes of single parts, so the company utilised JETCAM’s Single Component Automatic Processing and Nesting features (SCAP and SCAN) to automatically tool and nest parts. 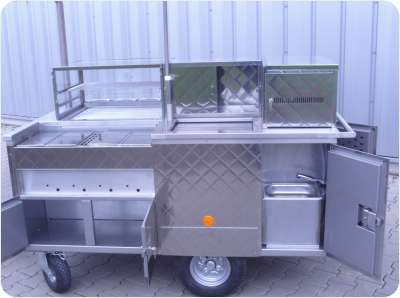 Ribo has taken advantage of JETCAM’s annual maintenance contract, which provides free software updates along with technical support. As a result they have seen regular and significant enhancements in various areas of the software, with Klingebiel noting that several have delivered further savings; “Some years back JETCAM included remnant sheet management. This allowed us to add all of our remnants into the material stock database automatically, allowing them to be easily identified and re-used. Common cutting / punching has also helped to further reduce material waste while also improving machine runtime, which we estimate at around 15-20%. We now run only two shifts instead of three.”

Over time their business diversified. Explained Klingebiel; “We changed completely from series production to small volumes and even one-offs of complex components. As a result we needed to find a way to program more parts quickly and also nest dissimilar parts to mix orders.” In 2011 Ribo purchased JETCAM’s Free Form High Performance nesting module, which will keep trying to find more efficient nest patterns over a pre-determined time period. Material waste instantly decreased by around 10%, with even fewer remnants being created. Said Klingebiel; “The benefit of High Performance Nesting is that we can mix orders together. Previously we could end up with dozens of remnants across each material/thickness of an order, whereas now only the last nest of each material might contain a remnant.”

Revision control allowed Ribo to store multiple revisions of each component, which cut down on errors such as older version of parts being made by mistake. Another feature, ‘Tool teach’, delivered further time savings. Klingebiel is able to teach complex tooling placement which is then subsequently automatically applied to any future similar geometry.

JETCAM has always stored tooling logic at the component level, allowing for multiple cutting technologies to be placed on each component. This was beneficial when Ribo changed machines on several occasions, arriving at their current setup of a Trumpf 5000 punch and Trumpf L3030 laser with Trumalift. Using Single Component Automatic Processing they were able to automatically re-import and re-tool the components for the new machines. Noted Klingebiel; “We had around 33,000 nests for the punch and 20,000 for the laser. We were able to leave the system processing the files we needed to re-tool overnight and they were ready the next day.”

In 2014 JETCAM released Automatic Sheet Processing (ASP), which could also apply tooling as well as skeleton destruction logic to the entire sheet with a single click. Said Klingebiel; “ASP was a godsend. As we have the luxury of being able to pick either the punch or the laser we can now decide which parts are cut on which machine based on their complexity and can then tool the entire nest with a single click. I’ve found it to be almost 100% accurate, with any minor tooling issues highlighted and easy to rectify.”

Ribo wanted to improve the automation of CAD import and ordering of components, so purchased a software product from a third party vendor. While it did offer some streamlining, it still needed multiple stages requiring Klingebiel to switch back and forth between apps. In 2016, along with updating their JETCAM PC they purchase JETCAM Orders Controller (JOC) Premium Automation. Commented Klingebiel; “The switch from the old system to JOC should not be underestimated. It wasn’t a step up - it was five steps up. Previously we’d import our DXFs to JETCAM, then send them to the old order management system, manually enter amounts and then split them between cutting technologies. With JOC we simply import a single CSV file with all of our parts, which I prepare in about 10 minutes, and then send it for processing. JOC will create component files and then nests them for their specified technology. One product - a food cart - comprises of 45 sheet metal parts. Previously it’d take me about 3 1/2 hours to process them - now they’re done in 90 minutes. Coupled with other updates to JETCAM Expert at the time we conservatively estimate it paid for itself in around five months.”

The company has also been extremely satisfied with the support of local reseller JETCAM Composite Gmbh, with Klingebiel citing that any questions are always answered quickly; “We never have technical problems. Most calls are ‘how do I do this’, and I can always reach someone and get a quick response.”

Ribo has been using JETCAM Expert since 2001 to drive a variety of Trumpf punch and laser machines without issues, and Klingebiel is confident that the software will continue to deliver benefits, whatever technologies they invest in. He concluded; “There’s a great deal of machining complexity that is taken care of automatically by JETCAM, but using it is easy and fast. As a business we have to continually improve our manufacturing processes to ensure that we remain competitive while delivering the highest quality product, and JETCAM is instrumental in helping us to achieve this.”