Nests up to 15% more efficient than previous system

Capricorn Composite GmbH, located close to Germany’s famous Nürburgring race track, manufactures prepreg composite parts for the automotive and medical industries, serving clients such as Porsche and Audi. They relied on the nesting software supplied some years back along with their cutter, which generated inefficient nests by today's standards, wasting prepreg material often costing up to €150 per square metre. The software was slow and complex to use. Separate CAD software was also used to import or design plies.

Said Arndt Hartelt, Factory Manager; “Previously we didn’t think about the software and possible inefficiencies. However, as the company grew we saw our expenditure on prepreg grow - it’s now our biggest capital spend per  month. The environment is also a concern, both for the company and for me personally, so we decided to allocate a dedicated resource to evaluate if it was possible to improve nesting efficiency and reduce or even recycle waste.”

The company set about defining the key points for comparing prospective systems. Material savings and overall cost were the two main considerations, however they also wanted  to ensure that the chosen system could support any brand of CNC cutter, and was modular, allowing cost-effective expansion in the future. Simon Ring, Project Manager for Nesting Efficiency was an Intern who joined in August 2014 and was appointed to oversee the project as part of his thesis, focussing on reducing material usage as well as waste management. 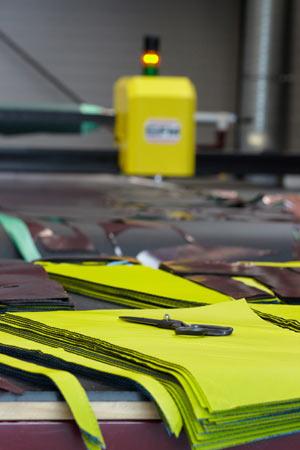 Simon identified several systems, also including an update to their existing software. They attended the Composite Europe show in October 2014, providing JETCAM Composite GmbH with a series of plies for nesting. Within 10 minutes JETCAM Expert had beaten the original nests by 15%. Further tests showed that JETCAM nests were at least 1% better than its closest competitor.

The decision was made in December 2014 to select JETCAM Expert, along with JETCAM Orders Controller (JOC) Premium Automation, with installation set for early February. The week before the on-site installation all software was installed remotely, and was operational in under an hour. Implementation, training and a review period was scheduled over the five days on-site, with Capricorn able to produce dynamic nests and generate working NC code for the machine from the first day.

After the first three days of training staff started cutting jobs on the shop floor. Said Simon; “One of our programmers was new to the company, with no CNC or CAM experience at all, but both staff were able to use the software competently after the training. The first morning we ran the cutter with JETCAM nests we saved €1500!”

Capricorn currently use a digitiser to trace physical ply templates. This information is passed to JETCAM Expert, with the built in CAD facility allowing staff to quickly complete the ply from the traced points and add profiling information. A side benefit of this was that they can now discontinue the maintenance contract for their previous CAD software as well as the old CAM software.

The inclusion of JOC Premium Automation allowed existing CAD (DXF etc.) files to be imported and processed in bulk - Excel spreadsheets often detailing up to 100 CAD files at a time could be automatically imported and processed, ready for nesting. Furthermore, staff could simply drag and drop complete kits of plies into work lists for nesting, specifying quantities and nesting for multiple materials with a single click. Simon estimates that the CAD import process alone was 30% faster than before, staff saving around 20% of their time overall, with tasks being much simpler to perform.

During the implementation Capricorn identified some improvements that could deliver further time savings during CAD import, such as automatically passing rotation and mirroring information with the CSV for the associated CAD files. This information was passed back to JETCAM and new builds of the software were provided the following day with the new functionality added.

With any mission-critical process good support is paramount. In addition to telephone support JETCAM Composite also provided remote support. This helped to demonstrate any concepts that Capricorn staff required additional assistance with after the training. Said Arndt; “If I don’t hear anything from the shop floor then I know everything’s OK. If the system didn’t work then this would immediately cause problems for our entire production, and with JETCAM we’ve had no issues. It was also important that we had ‘buy-in’ from staff - that people accept it and are proud to use it.”

Capricorn are considering upgrading JOC Premium Automation in 2015 to JETCAM’s award-winning CrossTrack composite manufacturing suite. This will allow them to track material and material life, from the freezer, onto the cutter and through to kitting. The company is continuing to focus on reducing material waste, and CrossTrack will provide this by identifying rolls to use based on remaining life as well as providing full traceability to exacting aerospace standards, from the finished composite part back to the roll.

With the improved material utilisation and reduction in programming time Capricorn conservatively estimate the return on investment at around two weeks. Arndt finalised; “It’s not just about the initial purchase price, as there were other systems that were similar financially.  I’ve simply never had another purchasing decision that was as easy to justify as JETCAM.  If we were to compare the payback on any other purchase, such as a new CNC machine or autoclave the payback would be nowhere near two weeks, and no other purchase has had such a positive environmental impact either. ”