JETCAM International s.a.r.l. today announced the release of version 1.04 of its JETCAM Orders Controller (JOC) Premium II. Originally launched at the JEC Composites show in Paris in March 2013 the latest version includes features aimed at both profiling and punching users, and makes the ideal companion to an existing JETCAM Expert CADCAM system.

JOC Premium II’s core functionality is as a remote ordering system, allowing production staff to queue CAD files for automatic component geometry entry and tooling, and to also build unlimited worksheets of either components or complex assemblies to be sent to JETCAM Expert for automatic nesting.

A number of key new features have been added to this new release:

Nest Costing: The ability to quickly obtain a costing for sheet metal components has traditionally been problematic for many companies. With JOC Premium II you can combine several of its key features to quickly import CAD files, create tooled component files using JETCAM Expert’s Single Component Automatic Processing (SCAP) facility and immediately build nests with resulting detailed part costing. Users can look at the cost of the part on each single nest or parts averaged across multiple nests, taking potential remnants, scrap, machine and operator costs into account. The information can also be exported for analysis or import into legacy data systems. 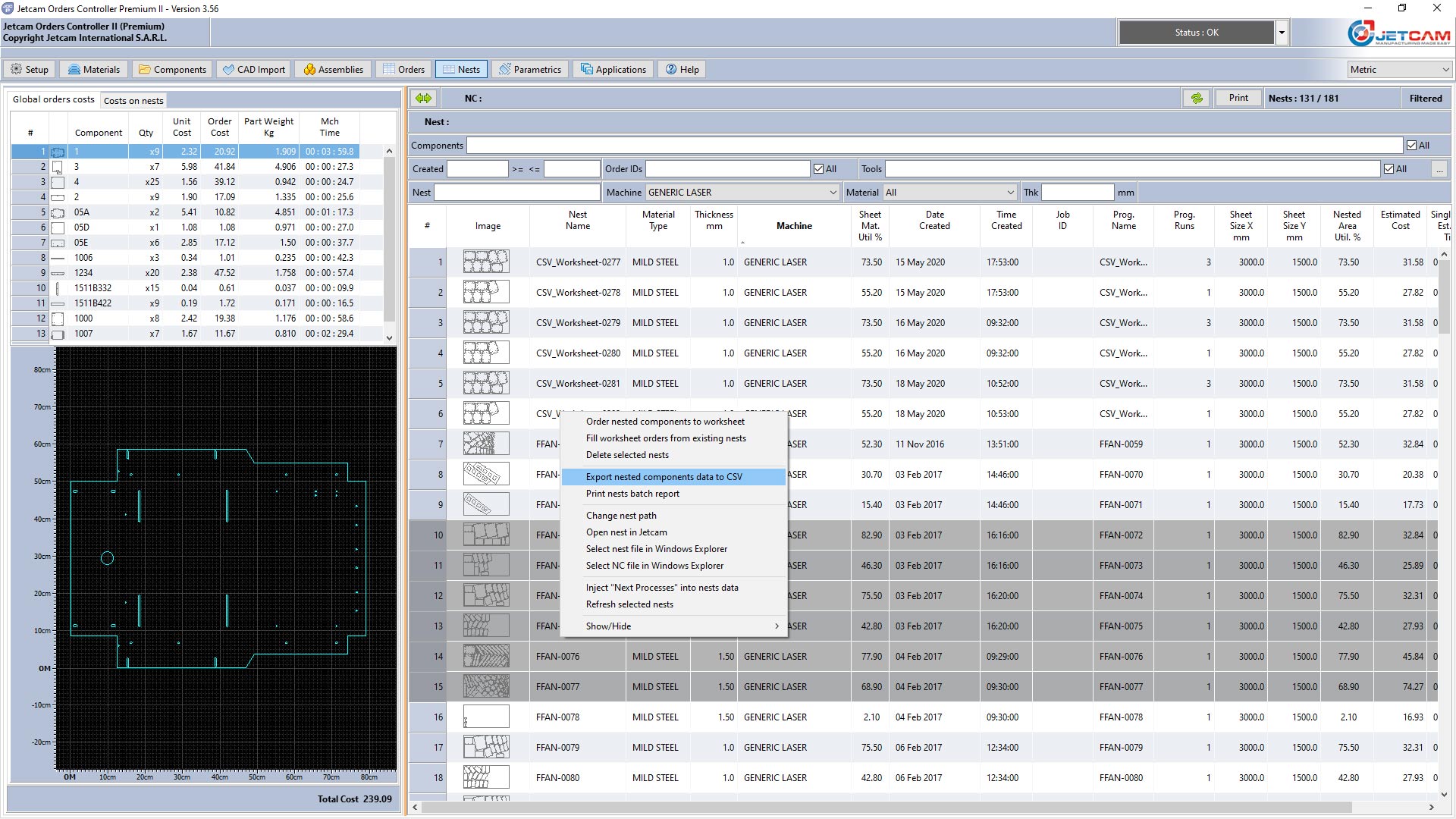 Tool information: CNC punch users often need to identify where tools are used, either on selected components or previously generated nests. This may be because a tool is broken or out of stock, or because they want to reduce the number of tools they use. JOC Premium II not only allows you to identify which parts or nests contain one or more tools, but also shows a nest tool graph detailing the number of nests that each tool is used on. A slider and zoom controls allows the user to quickly focus on the higher or lower numbers, and data can be quickly exported to CSV for further analysis or importing into legacy data systems.

Version 1.04 includes a number of other minor new features and enhancements to existing functions, which are also backed up by comprehensive video tutorials, allowing staff to get up and running without further training or costs. Custom processors can be easily written to reshape data coming in via the CAD or Order import to ensure seamless data transfer from other systems.

Martin Bailey, General Manager for JETCAM International s.a.r.l. commented; “We were excited to be able to release this feature-rich update so soon after the initial launch. Each feature stands on its own strength but together they deliver benefits greater than the sum of their parts. JOC Premium II is great for companies that have a lot of data – be it CAD files, component files, assemblies, tools or nests. Information can be immediately filtered and grouped to help users make sense of it, and we’ve included importing and exporting of all relevant data.”

The new version is available for immediate download from JETCAM’s website and is free of charge to JOC Premium users with a current maintenance contract. Users of JOC Lite can upgrade to JOC Premium II for only the difference in price. The JOC Premium II product page on the jetcam.com website has also been updated to include additional videos focussing on key new features.