Engineered Metal Products (EMP) based in Jackson, Wisconsin, provides short run sheet metal fabrication and prototyping services. In 2002 they purchased an Amada Gemini laser, which was supplied with a CAM system that was fraught with problems. The automatic tooling caused laser head crashes, the nesting did not function correctly, the system was unstable and the manufacturer seemed unwilling to fix known bugs in the software. 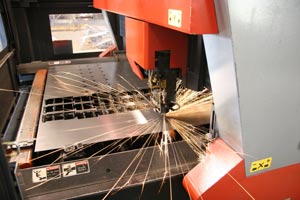 Said Mike Fischer, Laser Operations Manager; “We could never use the nesting module as it caused more problems than it solved, so all nests were produced manually. There was no auto-fixing of problem CAD files. The auto-sequencing did not work properly, costing us an average of 10 minutes per part to manually sequence. Other bugs in the system forced us to find manual workarounds, taking more time.”

EMP embarked on an evaluation of five CAM systems, with nesting efficiency being the main driver. Mike produced a nest of parts using his old system and used this to gauge performance of the evaluated systems. JETCAM was by far the most efficient nester, saving up to 20% (half a sheet of material) on the test nest when compared with the other systems being benchmarked.

A single license of JETCAM Expert was purchased in August 2006, along with the materials and orders databases and the free form high performance nesting module.  Training was provided in-house to Mike and two other programmers.

As expected, the time taken to generate nests dropped dramatically. Mike commented; “There was a tremendous improvement in programming capacity. In the past a 5-6 sheet nest could take upwards of 10 hours to create and optimize - JETCAM now automatically tools, nests and generates NC codes for the same parts in minutes -  easily a 90%+ improvement. Any CAD files provided by customers are automatically ‘healed’ if there are any problems, making the process from DXF to NC seamless.”

One additional benefit that EMP did not anticipate was a drastic reduction in machining time. “I was surprised to see that the capacity of the laser increased. With more efficient NC code, coupled with less sheet handling on the laser we are seeing a 20-30% increase in machine capacity.”

“Nest efficiency also improved, often by up to 30%.  A good case in point is a nest we produced recently (pictured top left). The manual nest had 36 parts on it. JETCAM managed to get 47 parts on the sheet. Given the thickness of this material (0.375” or 9.5mm) this material savings is a tremendous benefit for us. ”

Mike also relies on JETCAM Expert during the quoting process, making use of the nesting speed and runtime estimation information.  “Because it is so easy to generate nests, I can create preliminary nests when quoting jobs. As a result I know exactly how much material will be used and how long it will take to process on the laser.  This allows me to be more accurate in my prices, which has several benefits.  I know I won't quote a job too low and end up losing money on it.  I also know that I'll have the best possible material estimation (better than any of our competitors) because of JETCAM Expert’s high performance nesting module. This allows me to come up with the best possible price for jobs where a few cents on the per-part price decides who gets the job and who doesn't.”

JETCAM Expert also automatically provides a comprehensive array of reports, which were not available using EMP’s previous CAM system. Job sheets can be automatically produced with all the information needed to run the job, such as tool assignment, material type, thickness etc, along with a plot of the nest.

EMP is considering the purchase of an additional laser, but this decision only became possible once the issue of programming was resolved. Finalized Mike; “JETCAM’s nesting is simply not comparable to anything else we’ve seen. In fact, by all indications the system is going to pay for itself in less than 6 months of purchase because of the programming time, nesting efficiency and machining time savings we achieved. With the old CAM system there was no way we could buy another machine without doubling our programming staff. Now we can increase capacity using the existing staff without a problem. We also have a clear upgrade path to full automation if needed in the future.”