HOW FLY CUTTING AND OTHER SOFTWARE APPLIED TECHNIQUES CAN SIGNIFICANTLY IMPROVE THROUGHPUT.

The purchase of a new fiber laser is not an insignificant one. Yet often companies will overlook the relatively inexpensive cost of appropriate CAM and nesting software that could get significantly better performance out of their investment. Martin Bailey, General Manager of JETCAM explains techniques that can squeeze more performance out of your CNC laser. 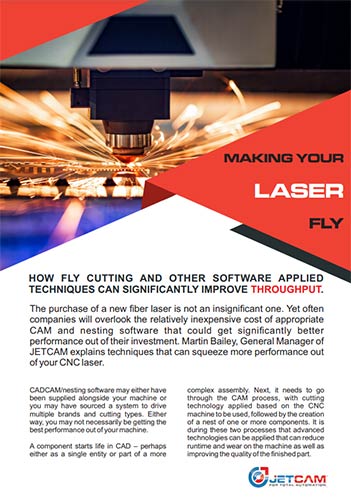 CADCAM/nesting software may either have been supplied alongside your machine or you may have sourced a system to drive multiple brands and cutting types. Either way, you may not necessarily be getting the best performance out of your machine. Furthermore, disjointed and disconnected processes mean that you cannot take full advantage of Industry 4.0 and digitalisation.

A component starts life in CAD – perhaps either as a single entity or part of a more complex assembly. Next, it needs to go through the CAM process, with cutting technology applied based on the CNC machine to be used, followed by the creation of a nest of one or more components. It is during these two processes that advanced technologies can be applied that can reduce runtime and wear on the machine as well as improving the quality of the finished part.

Let's start appropriately with one of the most common ways to improve efficiency – common cutting, also referred to as common line cutting. This is the process of eliminating the skeleton between parts, separating them instead with a single cut. Not only can this save material and consumables, but it can also significantly reduce the machine runtime. However, when performing common cutting there are other considerations to take into account, such as sheet stability on machines with fixed head and intelligent cutting of notches at the adjacent component edges.

If your components often contain arrays of holes such as air vents then fly cutting, also referred to as grid cutting can drastically reduce cutting time. This is only relevant for users of machines that will support this functionality. Also, this technique is only suitable for thinner materials.

Fly cutting works by turning the beam on/off across all cuts in one direction, and then repeating this in the other axis.

Fly cutting works by software analyzing the nest and identifying grids and lines of holes and then splitting the cutting into separate short line or arc segments that lie on the same line or circle. In other words, if you have a grid of, say, 10 x 10 rectangular holes, the beam might start top left and move the head say horizontally, cutting the top-most part of the holes by rapidly switching the beam on and off as it travels between them. Then, as it travels off the grid to the next line of cuts, a radius can be placed on the path, meaning that the laser does not have to stop the head movement completely in order to change direction, reducing machine wear. It will continue to 'snake' through all horizontal cuts until it reaches the bottom row, after which it will move onto the vertical cuts. Fly cutting will reduce cutting time dramatically and, if your CAM system is capable enough, can actually be used to cut the whole nest when lead-ins/lead-outs are not necessary.

Of course, fly cutting, as with common cutting, can bring the risk of collision, so this must be used in conjunction with intelligent path optimization and crash avoidance. As the final cuts are performed on a grid being fly cut each slug will be free floating and could tip, posing a crash hazard.

Fly cutting or not, your software needs to be intelligent enough to ensure that the head will avoid any areas posing crash hazard throughout the whole cutting process and on nests of any complexity.

The logic behind these processes is extremely complex, and in order to be flexible enough to automatically deal with different machines and technologies, materials and thicknesses, the software must allow the user a high degree of configurability.

Path optimization in general can itself yield reductions in machine runtime. Although factors such as avoidance of already cut areas may add to the overall travel time it will pay for itself many times over in avoiding expensive head crashes and subsequent downtime. On thick materials, in addition to optimizing the path taken one can also minimize the number of times that the laser must pierce the sheet. Chain cutting creates a single pierce and then will continue to cut components, moving from one to the next with an overrun. Optimizing the position of lead-ins will further reduce travel time.

Mentioned above and an important part of path optimization, intelligent tangential rounded movements between holes, which allow for smooth and continuous changes of direction can also speed up cutting process while eliminating machine stresses, so reducing the maintenance costs and machine down-time.

For those that are regularly cutting assemblies of pre-nested components 'mosaic nesting' can often provide a 'quick hit' in terms of time saving. Mosaic nesting is essentially 'nesting of nests' e.g. creating a static nest of a particular assembly of parts and then adding that to an existing nest, often by literally dragging and dropping it onto the sheet. A further benefit of this is that when an individual component is updated the mosaic nest and any additional nests that contain that part would be updated automatically, ensuring that the correct revision of a part is always cut.

When it comes to cutting thicker material there are other considerations that come into play. Cutting a nest of complex parts can cause a build-up of heat in a small, concentrated area which may lead to significant inaccuracies in component dimensions. Heat avoidance logic can be applied to automatically start cutting in a different area of the sheet after concentrated cutting has occurred in one area, thus eliminating build-up of potentially damaging amounts of heat. A predetermined zone can be automatically created around the area, along with a cooling period. As the material is cooling in one area the laser will move to another part of the sheet in order to continue cutting. 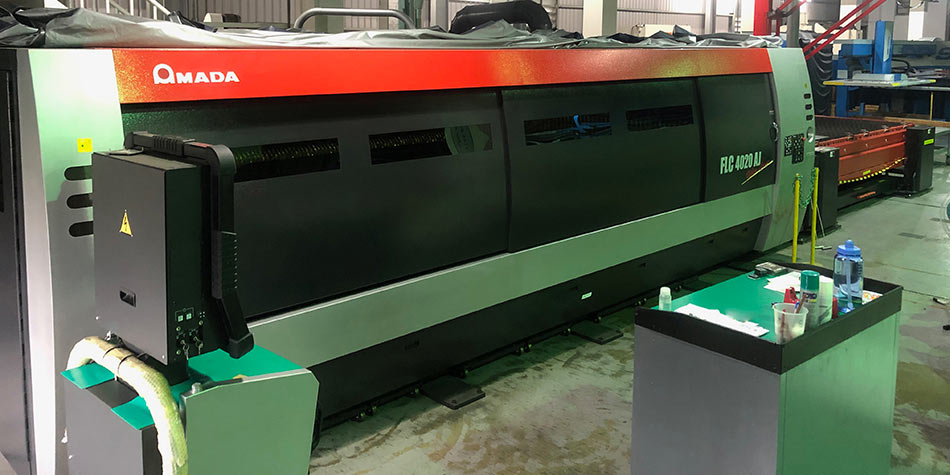 A good example of how multiple technologies can be combined to deliver quantifiable savings is I-Cherng Refrigeration, based in Taiwan. The company had been using JETCAM Expert to drive various Finn-Power CNCs since 1995. In 2018 they purchased an Amada Fiber laser, which was bundled with nesting software from the vendor. After a month of battling with incorrect NC code and a cumbersome interface they contacted JETCAM to obtain a post for their existing JETCAM software. After installation, the software delivered immediate savings. A combination of 'JET-Cut' fly cutting, advanced path optimization and common cutting saw machine cycle time reduce by 13.2% and material yield improve by up to 30%. Integration to the company's ERP system allowed parts to be imported, tooled and nested within minutes, reducing overall programming time by 80%.

Calculating ROI of your nesting software

It may be that the parts you manufacture lend themselves to one or all of the above-mentioned methodologies. When trying to calculate the return on investment on software that might deliver this functionality there are three key areas that allow you to quantify potential savings. These are: material, manpower and machine. Material consumption is the quickest to calculate. If you're saving an average of 5% on an annual spend of $1m a year then that's a $50k saving right there. Savings on manpower and machine runtime are a little trickier to calculate, but an estimate of hours per week can be multiplied by known machine and staff hourly rates to give you and approximate figure.

Of course, the holy grail is true automation. If these technologies can be applied fully automatically then you not only drastically reduce programming time but you make the job itself far less complex, removing the possibility for human error and allowing other staff to cover the role that previously only skilled programmers could cover.

Much has been said about Industry 4.0, but many sheet metal fabricators struggle in this area, but simple connections between systems can yield significant results. For example, linking your nesting software to your CAD system automates and de-skills the conversion from CAD drawing to NC code. Connecting ERP to provide lists of components for ordering also accelerates the time between order receipt and parts being cut on the machine. When the resulting nests are produced, part costing and runtime estimation can also be immediately fed back to ERP, not only allowing for better planning but also ensuring that the current and any future quotes will be more accurate.

The by-product of all of these connections is traceability and 'Big Data' - being able to see what was done, when and by who, as well as being able to identify larger trends. By investing just a little time to explore what data could be passed or follow through systems you will not only reduce and de-skill the processes that staff have to perform, but common errors can often be eradicated altogether.

CrossTrack for Sheet Metal utilises a Microsoft SQL Server database, where data can easily be exchanged either by manual or automatic CSV file processing or using Microsoft Web Services. All methods can be configured by the user, allowing tight integration to be developed in-house rather than through custom, bespoke and expensive development.

Companies often balk at the perceived high cost of CAM/nesting software, but it pales into insignificance when compared against the cost of a laser. Yet it is the software that produces the electronic 'fuel' for this hunk of machinery in the form of NC code. Get it wrong and your staff will spend time battling to generate programs, your laser will not be performing to its best and you'll be spending more on material. Get it right and you'll be more productive, competitive and, through automation, you'll de-skill the nesting process altogether.