Custom Cut Machine Inc, based in British Columbia, Canada, replaced their Flow CNC waterjet, driven by the vendors own CAM software in June 2007 with an OMAX 80160. They had been considering a CAM system upgrade since 2005, as although the previous software worked fairly well there was room for improvement with nesting efficiency and ease of use. 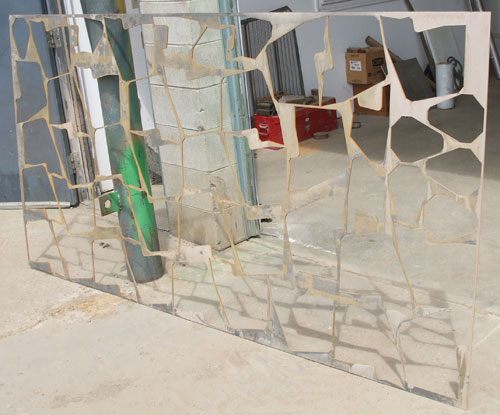 Lyle Paulson, President said; “I spent three years evaluating the market. I finally focussed on three systems over a six month period, and spent a day with each vendor. Two of the systems were up to 10% less efficient than JETCAM, which was recommended by OMAX. Also, I felt that they were clumsy, and the staff did not seem to have the same in-depth technical knowledge about their own products as the JETCAM dealer, NestOne Solutions. We weighed out all of the pluses - support, machine support, efficiency, and JETCAM came out way ahead.”

JETCAM Expert was installed in June 2007, along with JETCAM’s free form high performance nesting module, which outperformed the previous CAM system by over 30%, with one order which previously spanned 54 sheets now taking just 38. The installation process was seamless, with the software installed and generating 100% accurate NC code the same day.

Training was performed shortly after installation, but as the software proved so intuitive they were able to learn the majority of features prior to the training starting. Said Lyle; “We were able to learn around 80% of JETCAM’s day to day functionality just by using the system before the trainer even arrived.”

What was immediately noticeable was the reduction in time spent using the CAM system - through every stage from part import to NC code generation. Lyle added; “JETCAM just frees up my time. If I want to change a parameter of a part on a nest I can do so without having to go back to square one. With other systems, once you’ve nested, you’ve got what you’ve got and that’s it.”

Machine cycle time has also reduced, and Lyle attributes this to the close synergy between JETCAM and OMAX; “We had one program that previously took 10 hours to cut. With JETCAM we can cut it in 9.2 hours, because of features such as limiting traverse times and JETCAM’s sequencing  We have far fewer machine stops due to parts becoming dislodged as we can optimize the sequence to suit the stability of the nest.”
Like many companies today, Custom Cut choose to run both PC and Apple computers in their company.

ith the current Apple machines based on Intel CPUs, Lyle runs JETCAM on both a PC and an Apple, under emulation mode; “We have a dual core PC and a quad core Apple. JETCAM is the fastest CAM system I’ve seen on a PC, yet it’s 5 times faster on the quad core, even though it’s running on an emulator.”
JETCAM also requires less support than the previous CAM system, with almost all questions being of a ‘how do I’ nature rather than technical problems, all of which are answered quickly by telephone. Lyle noted; “The JETCAM and OMAX systems marry so well together that they simply require less support overall.”

Custom Cut has also benefited from features received under maintenance. They will make further benefits from the 2008 v16 release due to increased CAD file import support and additional sequencing flexibility.

With metal prices doubling in the first six months of 2008, Custom Cut are now winning business purely on the savings generated by the combination of JETCAM and OMAX. Lyle concluded; “Three years ago we were the only waterjet company within 50 miles. Now there are several. We won a $17k order which was solely due to a $5k saving on material through efficient nests. JETCAM paid for itself within six months, which is the fastest return of investment on software I’ve ever had, and I know that there’s a tonne of features that we are not yet taking full advantage of. We also have a laser and a wood router which we are also considering driving with JETCAM for 2D work.”