JETCAM International s.a.r.l. will be showcasing its fully automatic high performance nesting solution at booth no 7074 at Fabtech International 2008, to be held in Las Vegas between 6th and 8th October. 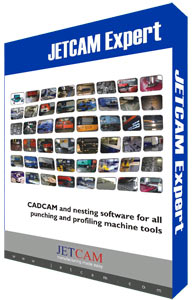 JETCAM Expert, now in its 16th version has recently seen considerable development on its punching automation, and a number of new features are also planned for release. Functionality such as tool teach mode allow JETCAM Expert nesting software to intelligently learn preferred tooling methods, which can then be applied automatically using JETCAM’s four nesting modules. Automatic common line punching saves both time and material by using a single cut to separate parts. Numerous other features have been included to reduce programming time, machine cycle time and material waste.

A spokesman for JETCAM International s.a.r.l. said “With the costs of metal doubling since the beginning of this year, coupled with many other costs such as fuel skyrocketing companies now have to look harder than ever at possible areas of savings. Fortunately many can make significant savings through nesting efficiency, or by automating the processes between orders being raised by MRP and NC code being available on the shopfloor.”

Visitors to the booth can request a free benchmark comparison. By providing DXFs of existing parts together with a sample nest of those parts, customers can receive a sample nest produced by JETCAM’s free form high performance nesting (FFHPN) module, which will show them exactly how much they can save over current methods, and will often pinpoint exactly when they will achieve full return on investment for the software.

The booth will be hosted by JETCAM US reseller NestOne Solutions LLC.