FAQ: What is nesting software

What is it and how can you improve nesting efficiency through different technologies.


For anyone new to the industry we answer basic questions here:

What is nesting software?

Nesting software takes a series flat patterns of parts to be cut out of sheets or rolls of material and works out the best pattern, or 'nest' in order to combine as many parts on the material with the least amount of waste. It also optimizes the cutting path to take the shortest time and generates the 'NC' (numerical control) code used to drive the CNC machine that will cut the material.

What is 2D nesting?

2D nesting is nesting on flat material, such as sheets or rolls. This is used in industries such as sheet metal fabrication and pre-preg composite (carbon) manufacturing where two dimensional shapes are cut from the flat material, either using a punch, or profiling technologies such as laser, waterjet or knife cutting. 2.5D also falls into this category using technologies such as routing. Although 2D parts are cut from sheets there may be z-depth pockets of material cut out.

Computer Aided Manufacturing. CAD (Computer Aided Design) relates to drawing your part. CAM relates to applying software to the process of manufacturing it. In the case of nesting software this means taking the line drawing of the 2D part, applying cutting logic (or tooling in the case of punching machines), nesting the parts and then generating the NC code to drive the CNC machine.

Common cutting is where two parts on the nest have a common edge, so a single cut is used to separate them rather than leaving material (referred to as the 'skeleton') in betwwen. Common cutting is mostly performed with rectangular parts for sheet metal but can be used where any two components have a common edge. The benefit of common cutting is that the nest will be cut much faster and there is less waste. On some machines you will have to unload parts as they are cut, as otherwise they will move on the CNC table. 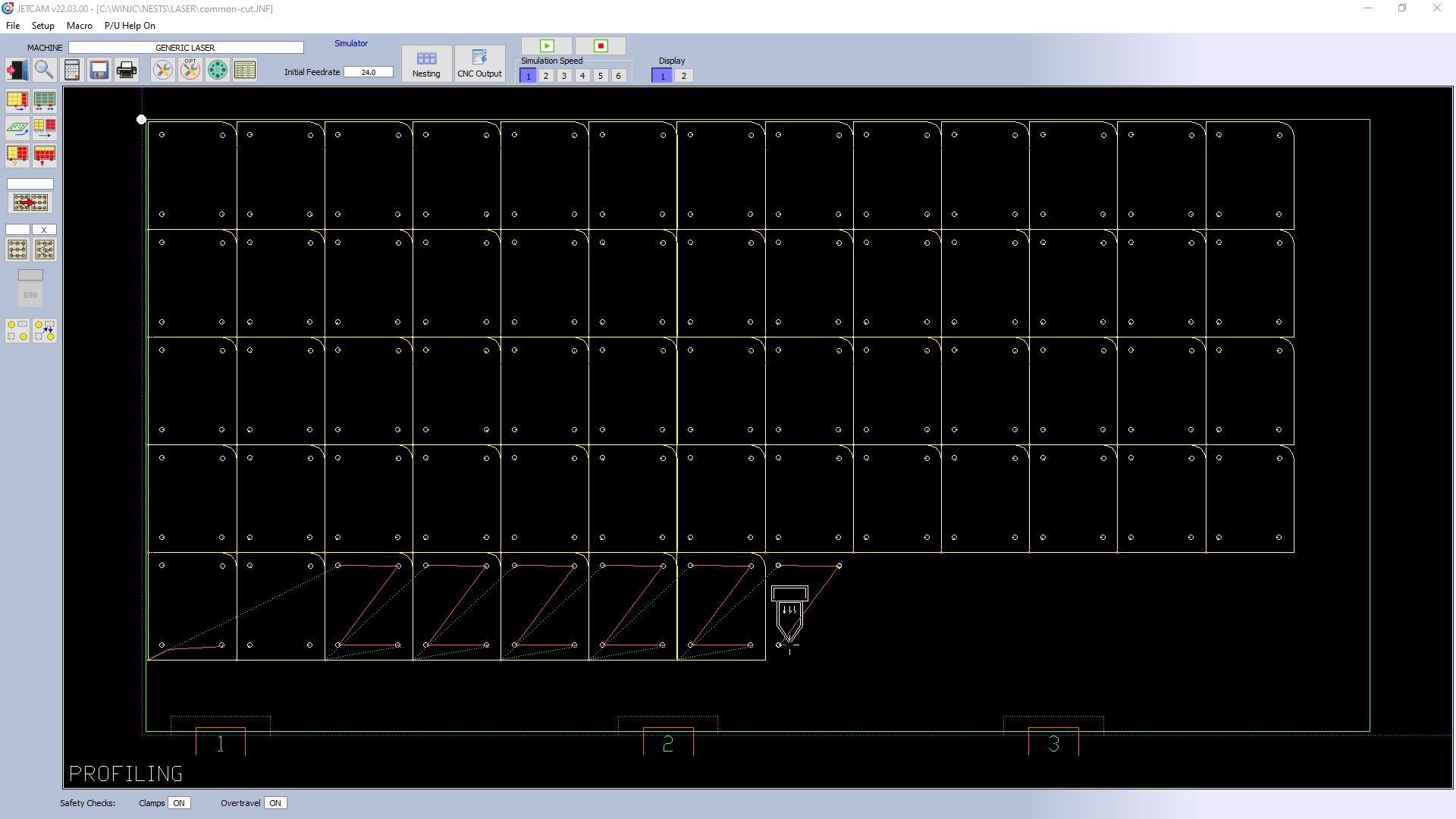 These parts will be common cut, with a single cut separating each part leaving no skeleton

What is fly cutting?

Fly cutting, also known as grid cutting is a process used with laser machines. Traditionally, an array of holes would be cut one at a time e.g. top, right side, bottom and then left, before moving onto the next hole. This is a slow process, as the laser has to stop when changing axes. Fly cutting will 'snake' across the array of holes, firstly cutting all of the top areas before moving onto the bottom areas of the first holes in the array.

What is bump nesting?

Bump nesting is a simple form of manual nesting whereby parts are dragged and dropped on the sheet. It can be used in conjunction with automatic nesting - users can automatically fill a sheet with parts and then use bump nesting to quickly add components to the remaining space manually. This also works in conjunction with 'mosaic nesting', where 'nests of nests' can be dragged/dropped onto the sheet. This is ideal for companies that often make 'assemblies' of parts together and want to cluster them on the sheet for easy unloading.

How do you use nesting software?

Usually you will either design the part within the nesting software itself (if it has CAD functionality) or you will import a CAD file in a format such as DXF from popular CAD systems such as AutoCAD, SolidWorks, SolidEdge, CATIA, Inventor, etc. Next, you apply cutting instructions to the part, either singularly or at time of nesting. Once the pattern of parts is created a cutting order is generated, followed by the NC code required for the machine. The NC code is then stored on the network or directly on the controller, ready to be loaded into the machine for cutting.

A post processor, often just referred to as a 'post' could be compared to a printer driver. Every brand of printer will need a different software driver installed in order to print, and CNC cutters are no different. A post processor will be configured for each individual machine, so even if you have two machines that are of the same make and model you may need a separate post processor for each unless they are absolutely identical e.g. same cutting area size, same tooling layout, etc.

How much does nesting software cost?

This depends on several factors, usually related to material efficiency and automation. In order to get a clear quote (and to be able to compare systems effectively) you should ask the following questions:

How do I calculate nesting software return on investment?

There are three key areas that nesting software will make savings: