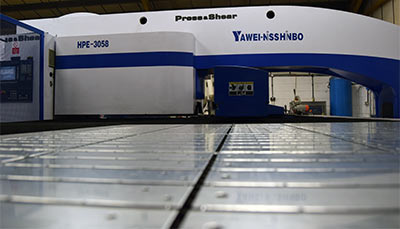 Weldall (Cannock) Ltd, based in Staffordshire, UK, provide architectural fabrication services. The company decided to replace their ageing Haco punch press with a new Yawei Nisshinbo HPE punch press - the first of its kind in the UK. Their Haco was being driven by a CAM system which was cumbersome to use and had no automation features such as tool teach or nesting. Ryan Blower, Operations Director said; “Automatic tooling was basically non-existent. With the old system you had to tell it exactly what to do.”

Weldall briefly considered other CAM systems, but after initial investigation of a competing system they quickly decided to take JETCAM, which was being offered by Press and Shear - the UK distributors for Yawei Nisshinbo.

They ordered the new machine and software, which was installed in November 2014. As JETCAM already had a postprocessor to drive the machine no development was required, with only minor tweaks needed during implementation to match their specific CNC hardware configuration. JETCAM Expert Lite was selected, which allowed them to get up and running at low cost but with a clear upgrade path in the future to automatic nesting and integration into other systems such as MRP.

Installation and training on both the machine and software spanned a week, with the software itself only taking a day. Of the training Ryan commented; “We were up and running very quickly. After the training, if I ever needed something I’d contact support and they’d produce a short video tutorial to show me what to do.”

Once staff started using the system they quickly saw benefits. Complex tooling could be ‘learnt’ by the system and then automatically reapplied to new parts. Parts could be auto-tooled with a single click, whereas previously users would have to manually place each tool. As a result programming time dropped by at least 50%.

Currently Weldall utilise a nesting capability within their guillotine software, which generates an optimised nest pattern. Using JETCAM’s bump nesting these can be quickly replicated using drag and drop, with automatic spacing against parts and the sheet edge ensuring that there are no overlaps of either parts or tooling.

One feature that was also beneficial in making instructions to the shop floor much clearer was the built in Advanced Reports Designer. This allowed Weldall to design a comprehensive works order report detailing parts required, tooling, material and including images of parts and nests. The report could be further customised to match the company’s corporate identity, giving a much more professional feel to the company.

In the two years since implementation the company has seen an increase in turnover/profitability in line with an ambitious business plan, which Ryan cites is due to the increased capacity that the combination of the machine and software have delivered. With plans for a second machine within 12-18 months Weldall also plan to upgrade JETCAM to include automatic nesting with the capability to go from CAD file through to optimised nests and NC code within seconds. Finalised Ryan; “We saw an ROI on the machine within 12 months, but with JETCAM it was closer to 6. We’ve also seen a few updates to the software, specifically with the new interface, that have been beneficial. Our plan is to continue with our long term-growth through continued investment in plant, machinery and technology.”